Meet Carlos Rigney: The Man in the Shop

Shop foreman Carlos Rigney started working for Breiner Innovative in 1984, but he says it felt more like the 60’s than the 80’s.

He also remembers having to cut many complex orders by hand, from tracing to cutting. Now-a-days, the machines used can be programed with AutoCAD and cut more precise parts than could ever be done by hand.

“It’s amazing how far technology and machines have come in such a short time,” Carlos said.

Yeah, you could say there have been a lot of changes in the 33 years since Carlos walked through our door. 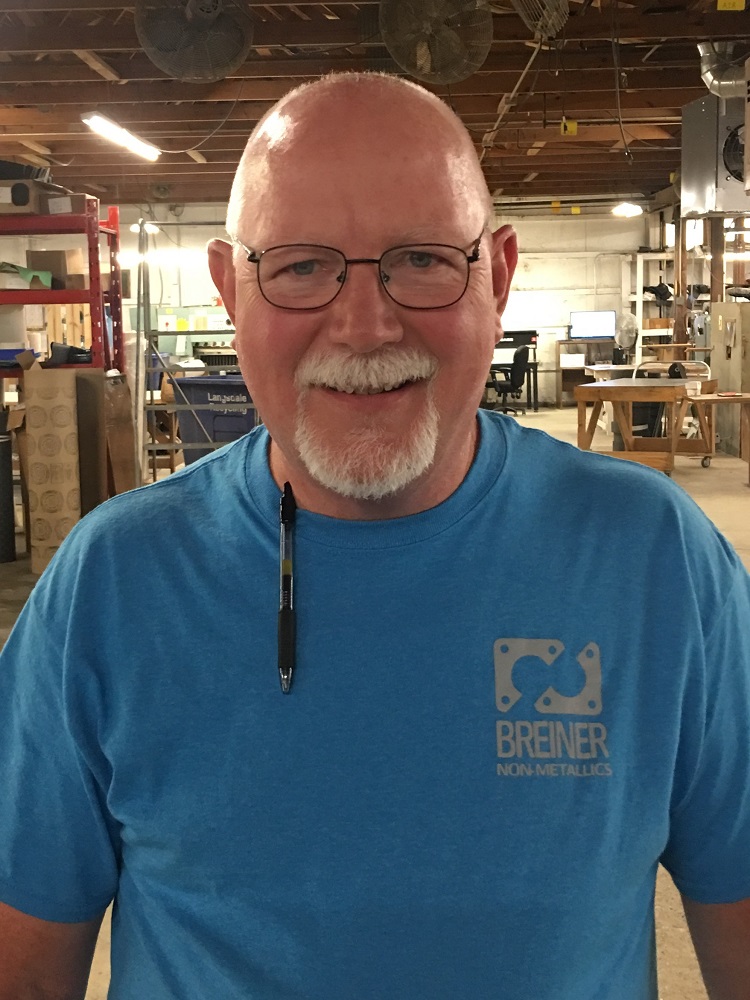 As the shop foreman, Carlos is charged with coordinating and assisting the entire shop. He monitors orders, assigns them to the appropriate department – “starting the journey” is what he calls it – and then works with each department to make sure they have the right equipment and personnel. In addition, he does most of the shipping and receiving, machine maintenance, die maintenance and does some die making. He’s a pretty busy guy!

Because of the high amount of cross-training at Breiner, Carlos is able to move folks around and allocate resources to ensure orders are filled promptly for customers.

“It helps make the job as well as our customer service even better,” he said.

For being in the midst of a 33-year career with Breiner, it’s funny to think that it almost never started at all!

Hailing from coal mine country in Cumberland, Kentucky, Carlos had never worked in a factory before. After he graduated high school, the job market was so poor he left town seeking opportunity. He figured he would come to Indiana – after all, he had met, fallen in love and begun exchanging letter with a girl who lived there!

“This was back in the day where you drove around, knocked on doors and left your resume,” Carlos said.

Carlos found his way to Breiner where he met and interviewed with Jan Parker (a 43-year Breiner vet) and was told that a position was opening soon in the shear department. But, the job originally went to someone else.

However, two days later he got a call. The new guy had cut his finger and quit, now intimidated to work around the equipment. Carlos was offered the job. Within 2 years, he was running the department and eventually worked his way to shop foreman.

For someone who had never worked in a factory or had any familiarity with the product before he started, what kept Carlos around for 33 years? He learned to love the work as well as the people around him.

He learned to love the work as well as the people around him.

“The diversity of everything we work on keeps things fresh,” Carlos said. “People warned me when I started that working in a factory is tedious and boring. But every day is something different; whether it’s the parts we are making, the machines we’re using, the customers we are working with or even what it is I’m going to be doing that day.

“When I started, Jan asked me if I had ever run a shear machine? I said I didn’t know what a shear was.” “But, Joe’s dad and grandpa are good people. They bring out the best in you. They were willing to train and teach me, but they also weren’t afraid to challenge me. I really liked that kind of environment, especially as I was coming along. It’s good for me.”

Like many of the folks that work here, Breiner has become a second family for Carlos. In fact, he says his fondest memory about Breiner isn’t about the job at all. The day he and his wife adopted their son, Carlos said the entire office was jubilant and celebrating right along with him – almost as if Breiner was getting another member of the family also, he said.

That reception has stuck with him.

Oh yeah, and that beautiful girl Carlos exchanged love notes with? They just so happen to have gotten married (still are 34 years later) and, in addition to their son, have adopted a daughter as well as taken care of a total of 9 foster children together.

Carlos also has trade school experience in welding and HVAC, both of which skills he’s been able to apply in some capacity at Breiner. When he isn’t working, he enjoys watching the Colts, NASCAR, fishing and going with his son to watch dirt track racing – a tradition started with his father.

Carlos is also very an active in ministry and has volunteered at the same nursing home for 20 years.

Want to meet Carlos or the other amazing and hard-working folks at Breiner Innovative? Stop by, say hello and let’s see if Breiner be the solution you’ve been searching for.